How To Eliminate Odors From Bags

Do you have a pre-owned handbag that smells of smoke, or a vintage bag that smells dank? We tested 4 popular ways of removing odor, including Febreze, coffee grinds, vinegar, and Meguiar's odor eliminator spray. See what worked the best at removing unpleasant odors.

Febreze was lightly sprayed onto a paper towel. The bag's interior was gently wiped down with this paper towel. Then, newly Febreze-sprayed paper towels were placed in the bag for a few days. We found this to only mask the bag odors temporarily. Rating: 1 out of 5 stars ✩

White vinegar was mixed 50/50 with water. A paper towel was dampened with this mixed solution. The inside of the smelly bag was wiped down gently with the paper towel. This removed a portion of the smell. Rating: 3 out of 5 stars ✩✩✩ 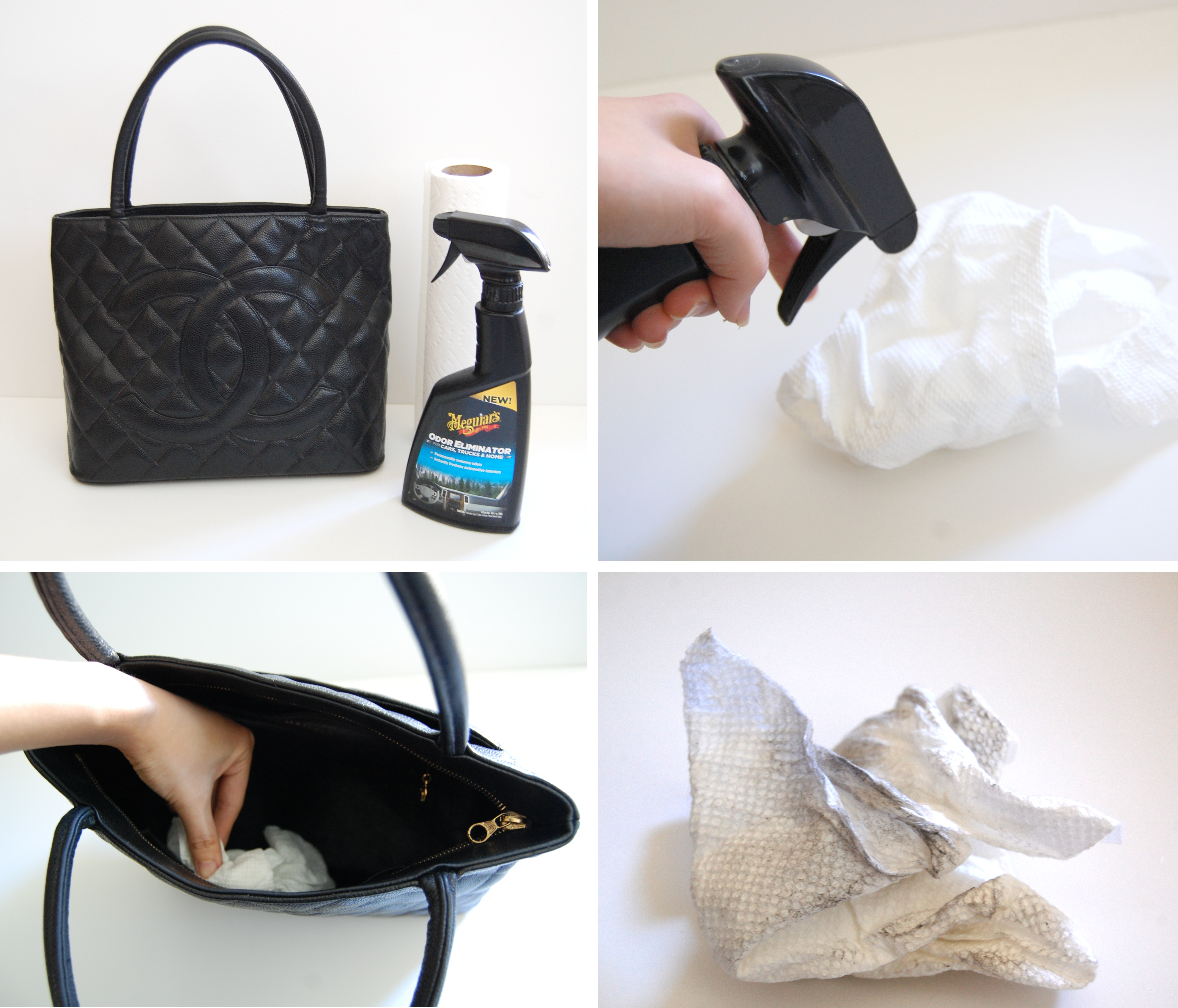 . The towel should only be slightly damp.

2. Test a small spot first on the inside of the bag. After testing proves that the spray does not adversely affect the interior of your bag, gently wipe down the inside and pockets of the bag. We were able to use this spray on both cloth and leather interiors.

3. Repeat until the bag's odors are not bothersome.

Meguiar's Odor Eliminator spray was used successfully on both a very vintage bag that smelled mildewy and a bag that originally smelled heavily of cigarette smoke. It was by far the most effective way of removing stink out of bags. It also did not make the bags overly perfumed afterwards. The resulting smell is almost like nothing or very faintly of a new car's interior. Rating: 4 out of 5 stars ✩✩✩✩

Want to learn more about bag care? Check out Everything about Dustbags, and our popular How to Clean Louis Vuitton bags.

How to Remove Stains from Chanel Caviar Leather

Bag Care / Cleaning According to Chanel

All About the Louis Vuitton Speedy Shaper

How to Refurbish a Louis Vuitton Bag

Recent Comments
How to Remove Stains from Chanel Caviar...If it is a harder caviar, perhaps. Please proceed at your own risk. Thank...
How to Remove Stains from Chanel Caviar...Please advise if this works on this Chanel caviar bag attached (1 image)
Vintage Herve LegerYes, Lollipuff is familiar with vintage pieces.
Vintage Herve LegerAre you familiar with what the original tag looks like? I have a dress that has the name, but no border. I know dresses...
How To Eliminate Odors From Bagsi inherited a LV vintage garment bag which has such a strong smoke odor that i cannot have it in the house. Both the...
Ending Soon