Introducing my new favorite shoes. Call me girly, but they make me smile when I see them sparkling brilliantly on my feet. Check out how these Christian Louboutin shoes were transformed from a pair of very worn ballet flats to twinkling slippers.

Don't ever throw out a pair of Christian Louboutins. With a good cobbler, they can almost always be brought back to life for someone who will love them dearly. They are sexy red-soled Louboutins, the most in-demand shoe there is! 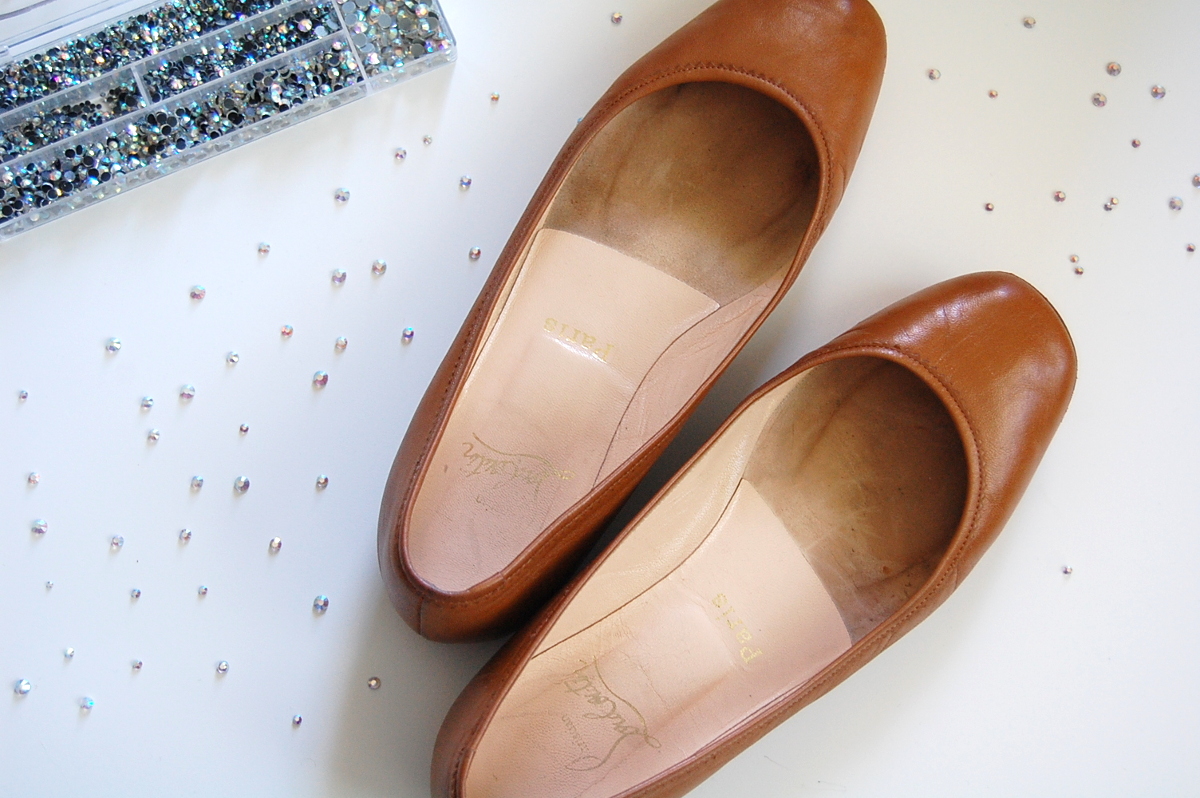 These Christian Louboutin flats were quite worn. But, I had a vision for these old ballet flats. 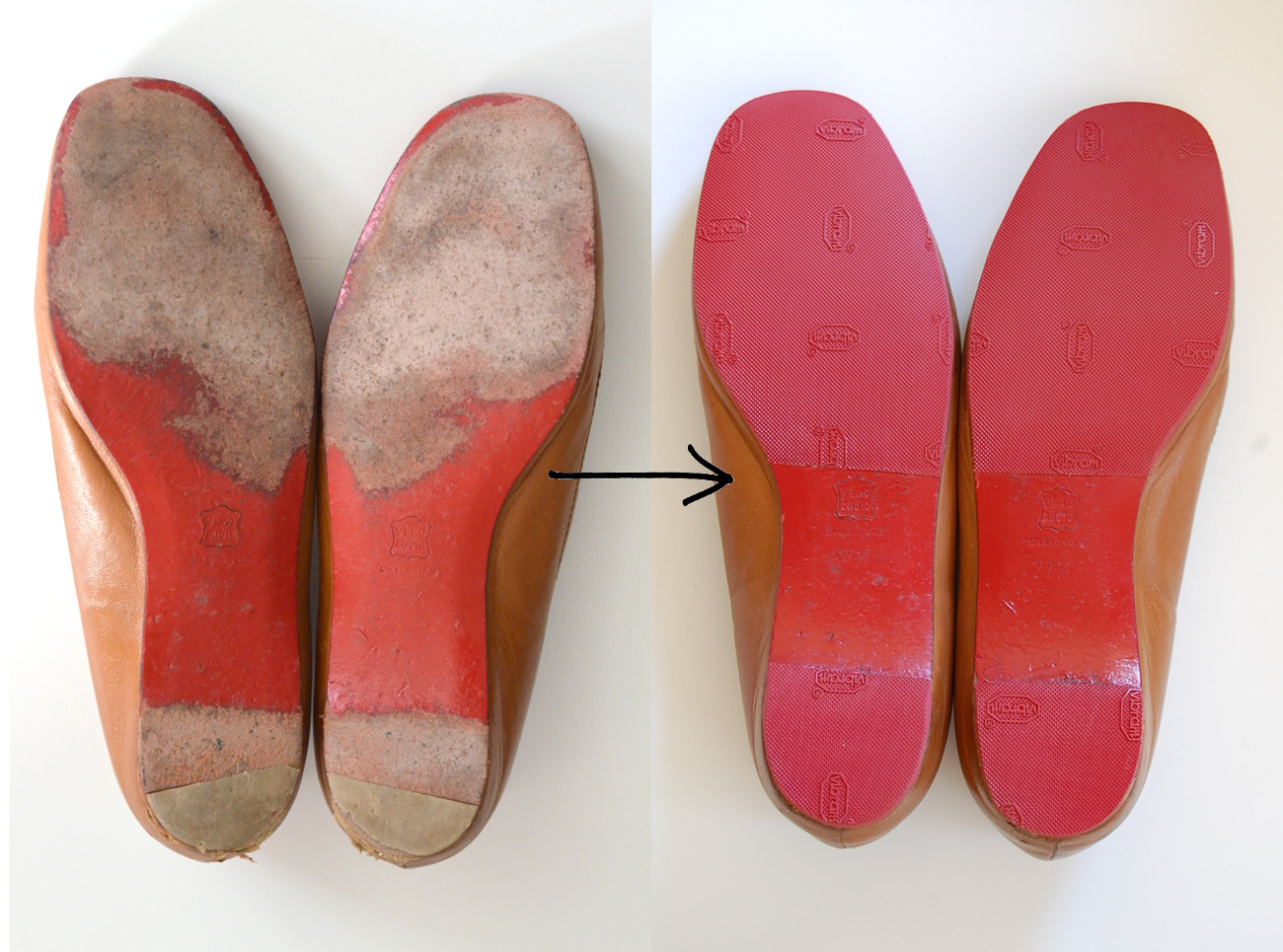 First, they were taken to the cobbler and professionally vibramed. Vibraming, for those of you who are new to this process, is the act of applying a sturdy rubber to the sole of the shoes. When Louboutins are vibramed with red vibram, not only does the shoe get additional protection from moisture and impact, the sole will stay red with countless wears. 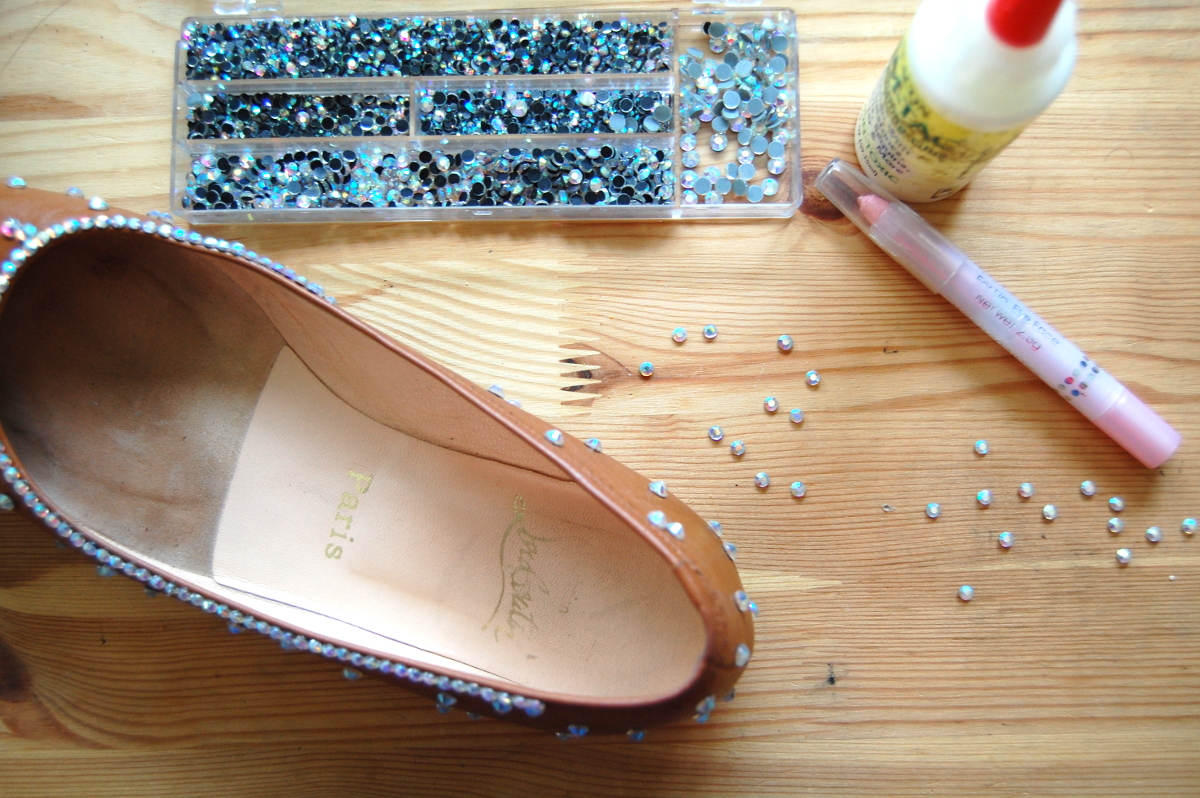 Once the shoe's soles were repaired, I got all of my materials for strassing together. This included Gemtac glue

, cheap white eyeliner for pick and placing crystals, and the crystals.

Update: I have found that crystals don't stay on as well on flat shoes, because flat shoes flex and bend so much. In the areas where the crystals were lifting off, they were re-glued using a much stronger glue, Gorilla super glue. Gorilla super glue is a much better glue for strassing imo. 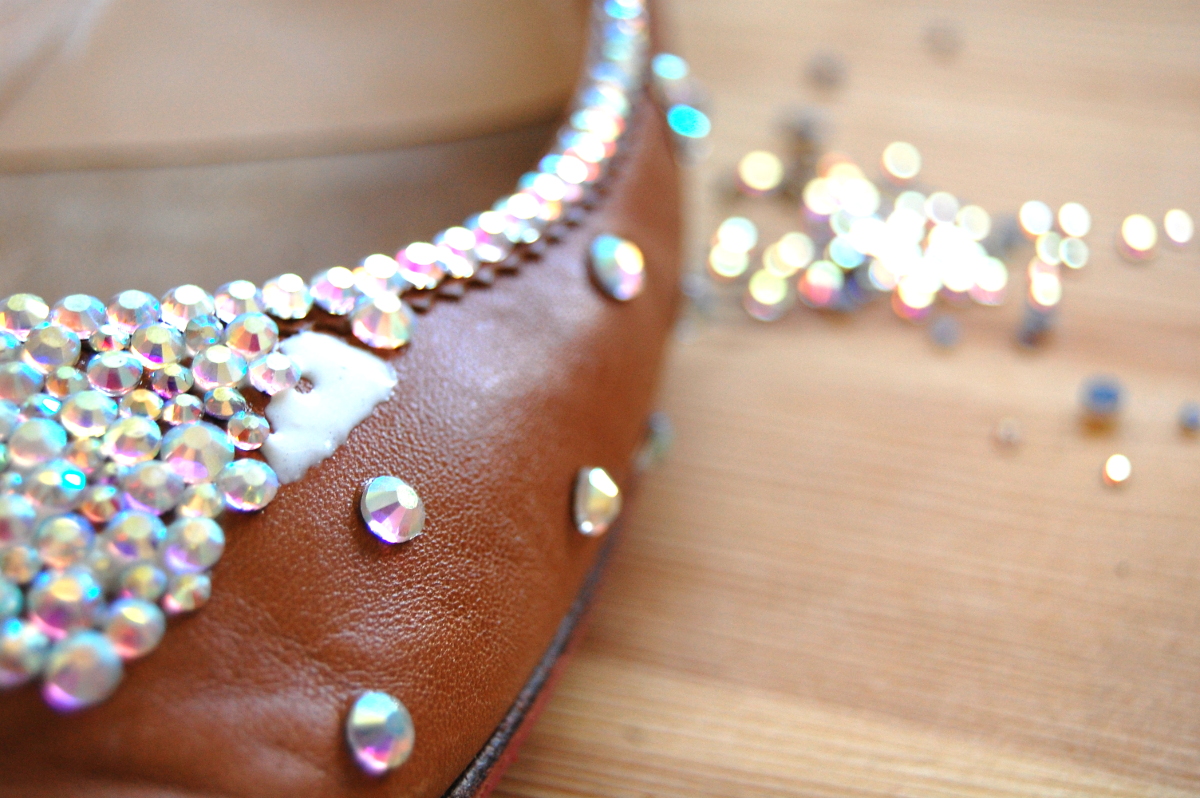 First, I outlined the edge of the shoes with size SS10 crystals. Then, I mixed the crystals together and just started gluing randomly-sized crystals closely together. Gemtac dries clear, and it's always better to put too much glue rather than too little.

For fun, here's the process from start to finish:

Not going to sugarcoat it, but taking these boring brown flats to dazzling slippers took about 12 hours cumulatively. But when it's done in small chunks, it's actually therapeutic. :) For someone who is new to strassing or covering shoes with crystals, it will take longer. 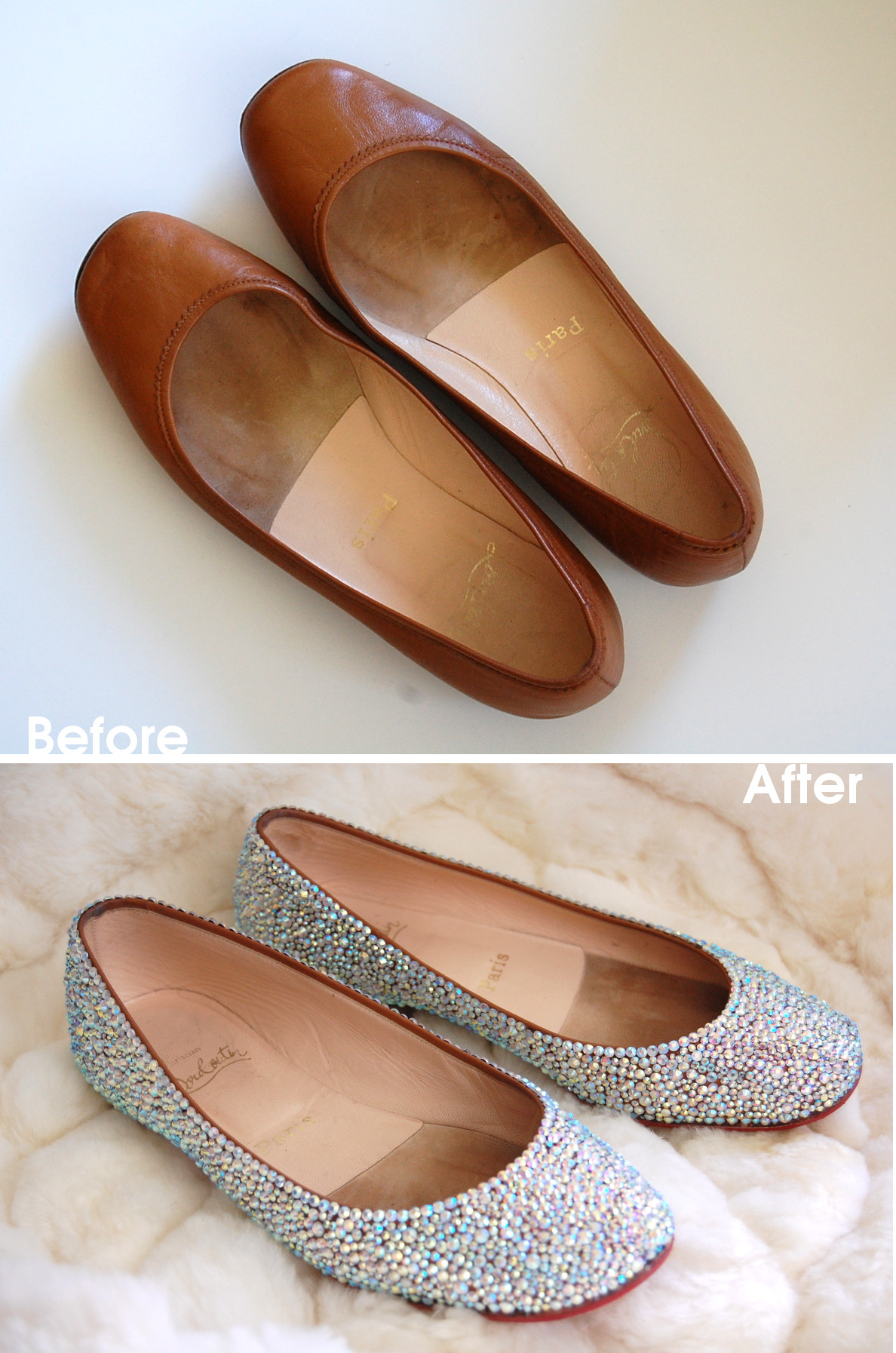 I LOVE LOVE these slippers. They are so casual yet so polished. And, they sparkle like crazy in the lights and sunlight. 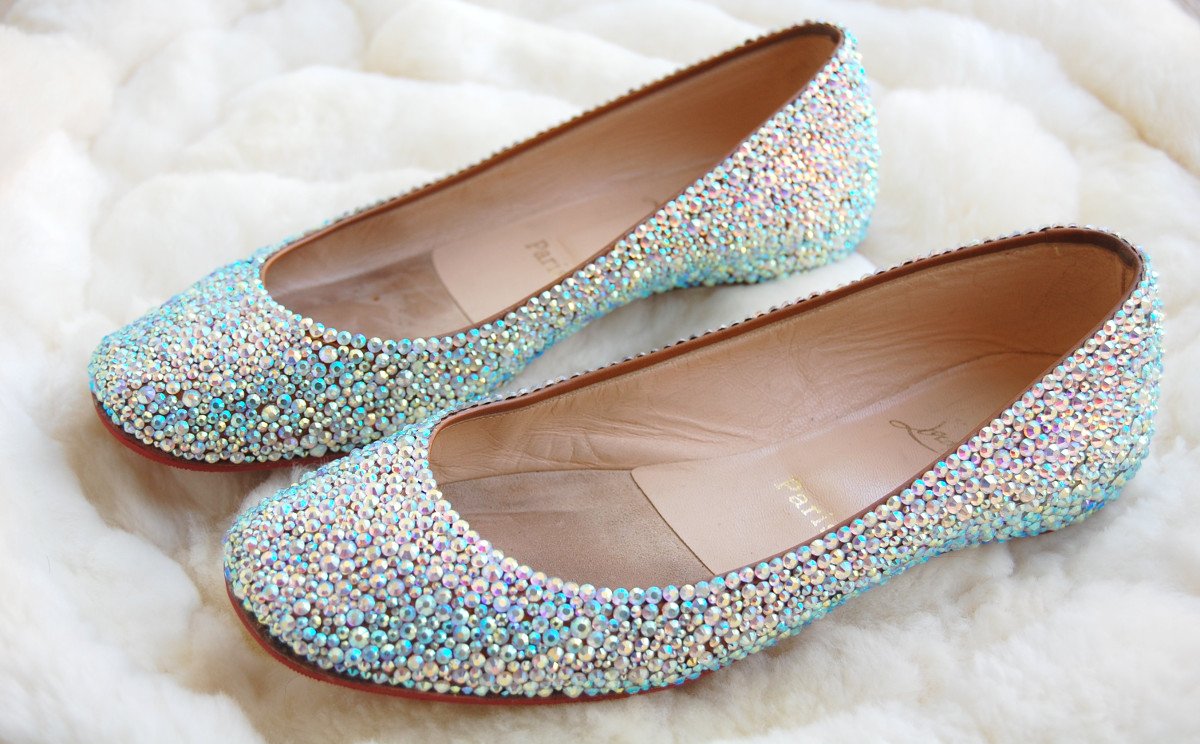 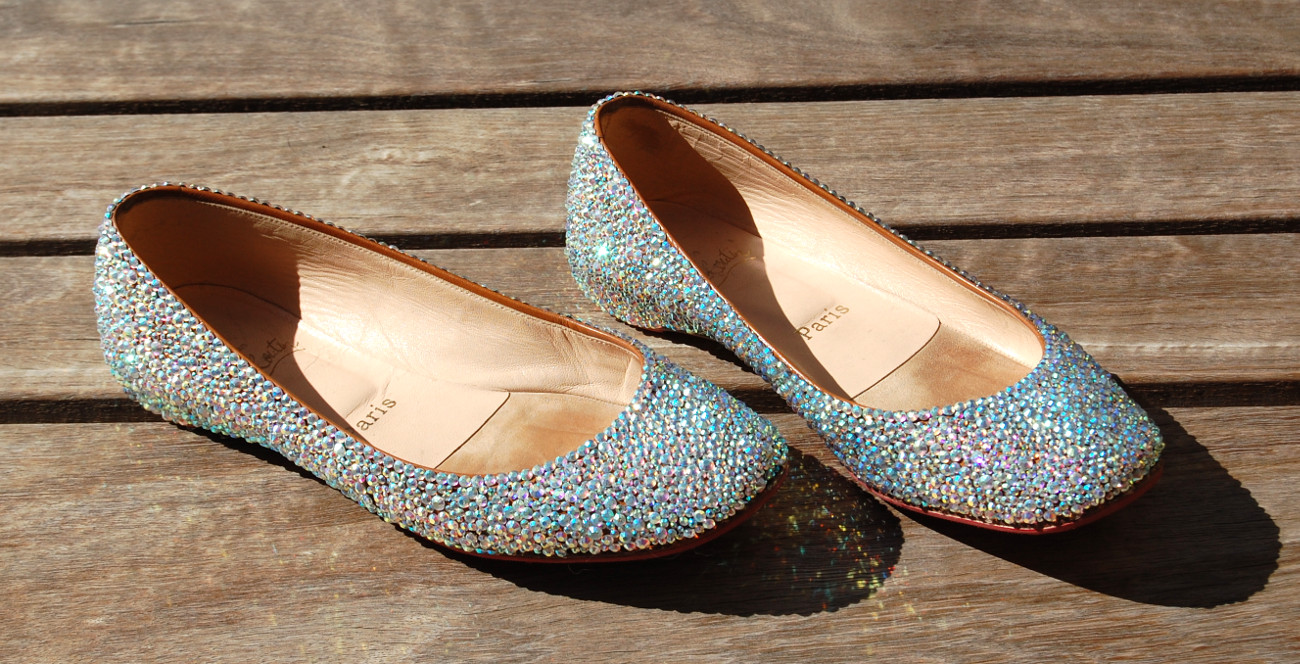 As a girl who adores heels, it's shocking that my current favorite pair of shoes are flats! 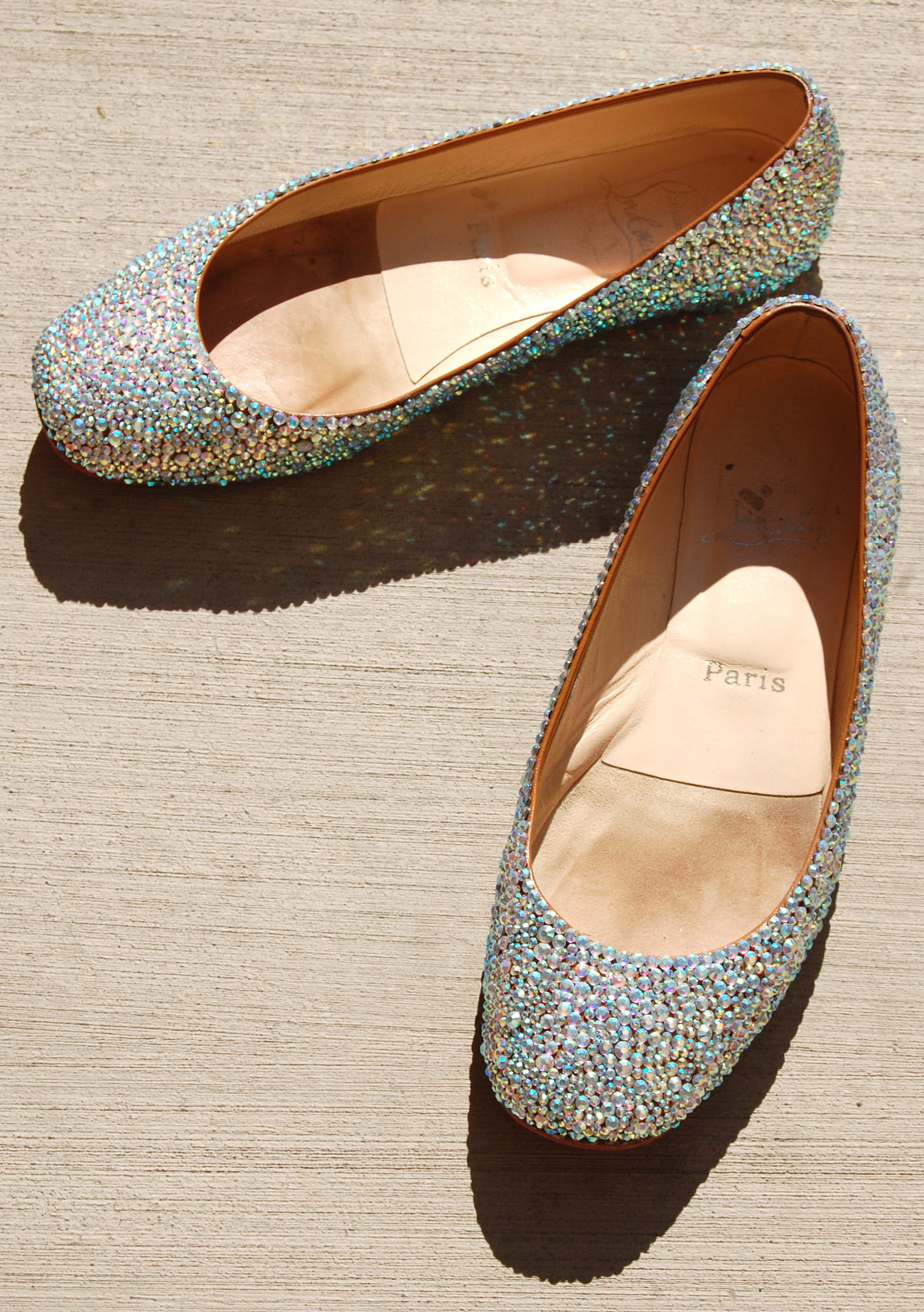 Hope you enjoyed this post as much as I enjoy my new sparkly shoes.

Update: I have found that crystals don't stay on as well on flat shoes, because flat shoes flex and bend so much. In the areas where the crystals were lifting off, they were re-glued using a much stronger glue, Gorilla super glue.

Hottest Shoes of the Moment

Recent Comments
New without tags Herve Leger beet red cap sleeves...Yes, sure. It's fair to give a discount to a good customer who buys several dresses. Let's say 15% discount for more...
New without tags Herve Leger beet red cap sleeves...I’m interested in 2 maybe 3 of ur dresses. I like a Pink with black. Lime green and this one. Do u offer any discount...
Listings Temporarily Suspended Due to Payments...Hi mjlanni, Thank you so much for your patience. We have responded on the private message board of the...
Listings Temporarily Suspended Due to Payments...So I purchased an existing listing. How do I go about making a "manual"...
Chanel Turquoise Lambskin Leather Camellia...Hi, I do not have it available anymore. Thank you for your interest!
Ending Soon