Many Chanel costume jewelry pieces will have markings. Understanding these markings is an important aspect for authentication and will also reveal when the item was made and its history. We hope that you enjoy this Chanel stamping guide. Currently, it is the most complete and accurate guide online. 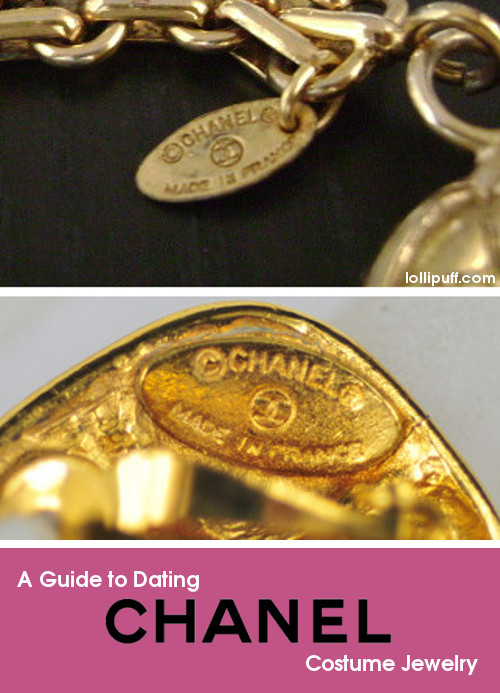 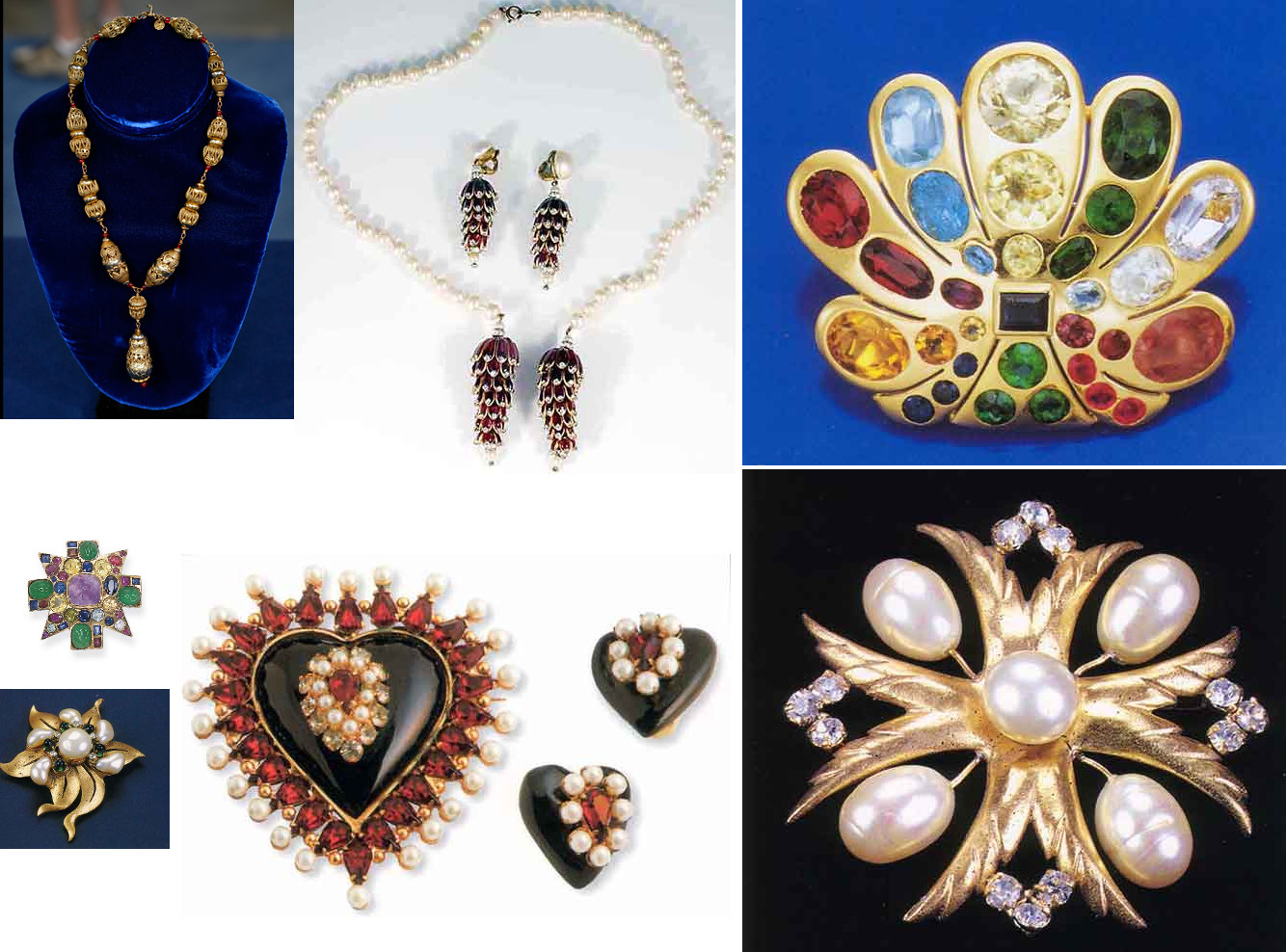 Pieces from 1921-1939 were made to complement Chanel's clothing. As a result, these extremely rare pieces were left unmarked. In 1939, due to WWII, The House of Chanel stopped operations. 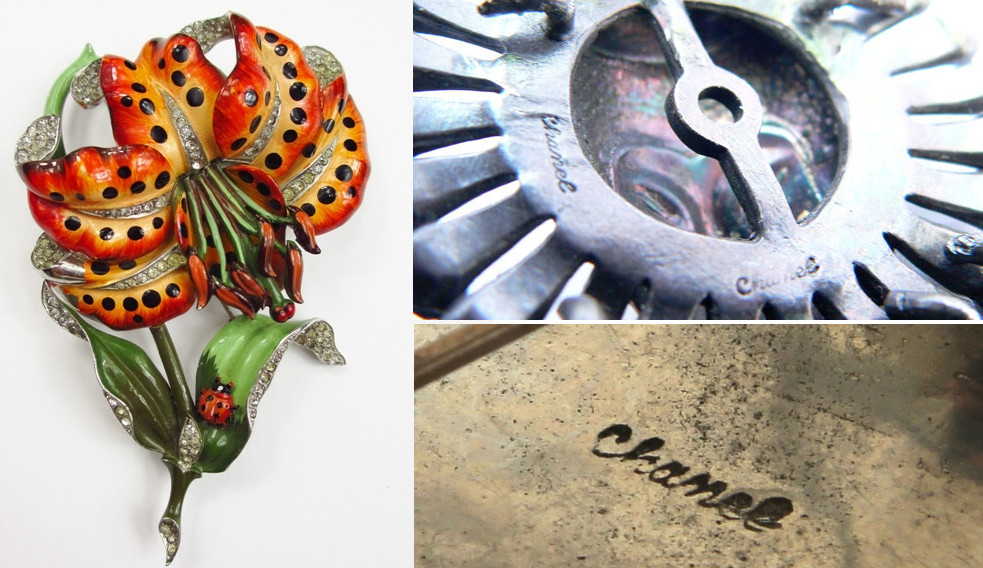 Jewelry made by Chanel Novelty Company in 1941 is quite valuable. The style of Chanel Novelty Company was distinctly different from Chanel's, and these accessories have their own unique beauty and craftsmanship. They also represent an important event in Chanel's history. Chanel has never marked their jewelry in cursive.

In 1954, Coco Chanel resumed business in her Parisian boutique at 31 Rue Cambon. Many pieces in this time period remained un-stamped, as Chanel jewelry was still being designed as part of an entire couture outfit. However, some jewelry started receiving very basic stamps. 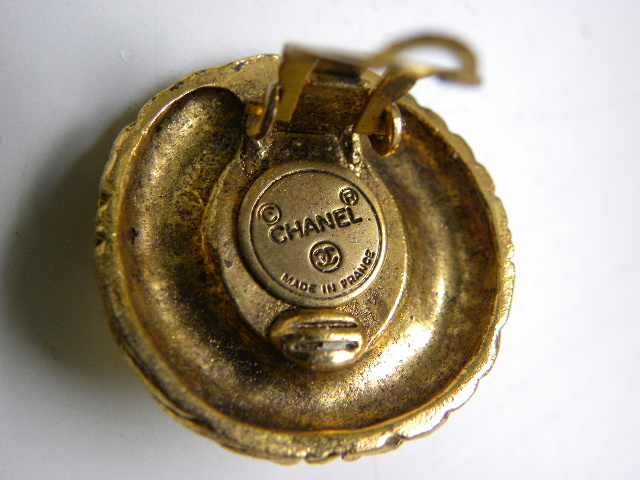 After Coco Chanel's passing, jewelry stamping changed. Some jewelry was also stamped with a copyright, trademark, interlocking cc and made in France stamp. 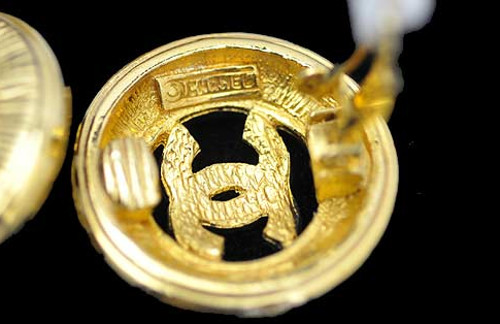 You may also find pieces with ©Chanel from this time period.

In the early 80's, date of production is incorporated into the stamping, so many pieces have a year in the place of "made in France." 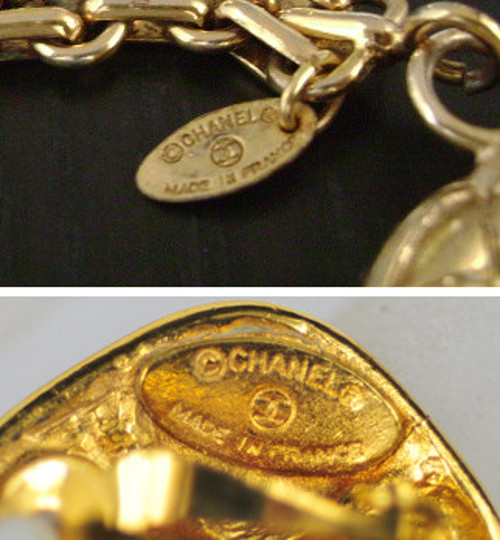 But not all early 1980's jewelry had the year. Some did not show the date of the jewelry but, the stamping is distinctly different from markings belonging to another timeframe. 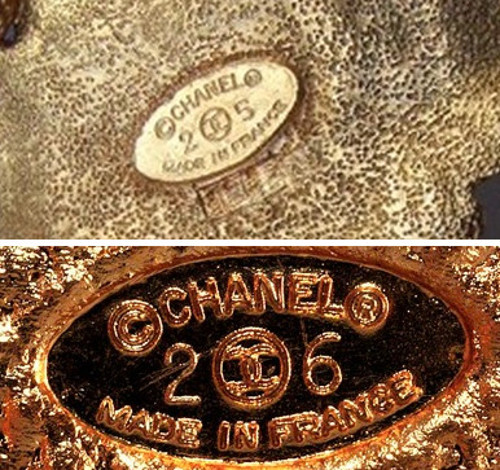 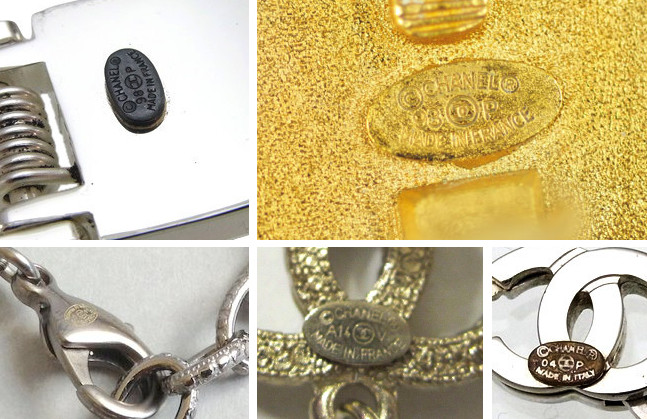 From 1993 - 2015, the jewelry includes both the season and year. Season markings include A for Fall, P for Spring, C for Cruise collection, and V for continuous line. The numbers represent the 3rd and 4th digit of the year. For example, 95 stands for 1995, and 03 stands for 2003.

Stamping is just one aspect of proper authentication. Just because jewelry may have similar markings, does not necessarily confirm the authenticity of that item. Markings are counterfeited as well, so the entire piece needs to be observed. Also note that sometimes the markings are on a separate piece that is soldered onto the jewelry piece. As a result, there are authentic jewelry pieces with missing markings due to it falling off.

Please also note that there can be many variations of each stamping, and there are also a few uncommon stamps not discussed. However, the above encompass most Chanel costume jewelry stamping.

Hope that you find this guide helpful for dating and authentication purposes. Thanks for stopping by!

For authentic designer items every single time, shop the Chanel on sale here.

Recent Comments
New with tags Herve Leger 2010 Runway Pumice...its not white and its not gray designer color is "pumice" and the closest it looks perhaps on the mannequin. Though...
New with tags Herve Leger 2010 Runway Pumice...Hi, is the dress white or gray?
Listings Temporarily Suspended Due to Payments...So very sad, but there is a time and place for everything ❤️ and even though the marketplace has been fantastic, the...
Lollipuff Undercover: Fake Designer Bags in...Our authentication service would be able to review your item thoroughly: https://www.lollipuff.com/authentication-servic...
Lollipuff Undercover: Fake Designer Bags in...I think I may have just purchased a fake garment bag for $550. I am just sick over it. It is vintage from the 70’s and...
Ending Soon